The handheld roughness meter is used to determine the surface roughness. The compact surface handheld roughness meter is a handheld device for mobile use. Due to the power supply via a powerful battery, it can be used directly on site. This handheld surface roughness meter is used in the laboratory, production and generally wherever the roughness of the surfaces is to be determined. The measured values are displayed on the very clear OLED display directly on the meter. In addition, the handheld roughness meter has a storage option for up to 20 measured values, which can later be read out via the micro USB an interface. For this purpose, the measurement software can be used, which, as well as the USB cable, is in the delivery. The built-in rechargeable battery is also charged via the micro USB interface. The already mentioned measurement software is particularly suitable if some series of measurements are available. The data is then transferred to the software and can be evaluated directly on the screen. 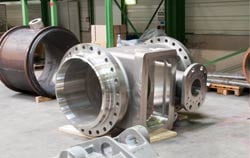 Each calibration certificate is issued especially for the customer and instrument, and therefore is exempt from the right of return.
Manufacturer: Exova Metech GmbH ( Caldi )
£ 178.00