The current signals are transferred to the data logger via plug-in terminals. The plug-in terminals on the current data logger make it possible to switch between the connected sensors with a mA output relatively quickly and easily. This ensures that the current data logger can be used in operation universally and flexibly. Scaling of the measuring signal is not necessary since the measured values are stored directly as mA. In Excel, the scaling can then conveniently be carried out manually. 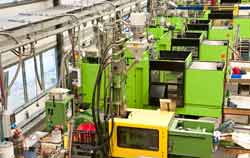 The current data loggers are used to record the output signals of numerous 0/4 ... 20 mA sensors, for example, during pressure measurement or flow velocity monitoring. Monitoring, registration and evaluation of e.g. temperature, humidity, pressure, flow, pH-value ... at the production facilities with the standardized output signals 0 ... 20 mA can be done easily and accurately. Often, customers or suppliers also require a proof of certain process parameters, which you as a manufacturer can conveniently store as a current signal on the machine. The current data logger PCE-CR 10 can be used almost anywhere where a stationary sensor or transmitter has to be tested temporarily. The current data logger is also applicable when the measuring technology should be used as mobile. Even as a manufacturer of products itself, during the operation of machines you can store the essential information as a standard signal directly in the data logger and later evaluate it on a PC or laptop. Thus, the current data loggers also serve for machine monitoring or machine analysis.