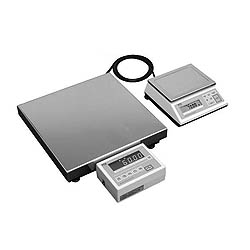 Weigh platform system for professional piece counting, each consisting of a bulk scale and a reference scale. Theweigh platform is in three verifiable and three non-verifiable (but calibrateable) variants. The two scales are connected via an interface cable. The reference scale assumes the fine weighing of the smallest components and the bulk scale then shows the number of pieces of large quantities of these parts carefully. The numbers are quickly identified. If you need a printout of the numbers we providethe appropriate printer. Orconnect theweigh platform to your computer (optional softwarekit) and transmit the weighing data directly to the computer. All variants are calibrated according to ISO, the verifiable versions can be calibrated.

The weigh platformis used not onlyforinventory. Often items like screws or balls are weighed and packaged for shipment after production. However, to determine the mass of the price of the goods, a PTB-counting system must be used in each case. We can supply you with both system variants.