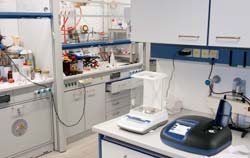 The measuring range of this Abbe refractometer is 1.30000 nD to 1.70000 nD. The D stands for the wavelength of the light used in the measurement with 589.3 nanometres wavelength. The refractive index depends not only on the type of light but also on the temperature. As the temperature increases, the refractive index decreases. To make the highly accurate results possible, many Abbe refractometers have tube connections for temperature control.

Determination of the the Brix value with the Abbe refractometer
There is a direct relationship between refractive index and Brix value. Therefore, instead of the refractive index, the Brix value can also be determined very accurately with this digital Abbe refractometer. The Brix value is the most frequently used unit for measuring sugar concentration worldwide and is very often determined with the Abbe refractometer. It is defined by the sucrose content in water. At 1 °Brix = 1 %Brix, 100 g of solution contains 1 g of sucrose in 99 g of water. At 12 °Brix = 12 %Brix, 100 g solution contains 12 g sucrose in 88 g water. The Brix value is often used as a test value – also for samples not containing sugar – because it is easier to compare than the refractive index. For example, at 20°C measuring temperature 2 %Brix = 1.33586 nD, 12 %Brix =1.35093 nD, 30 %Brix = 1.38115 nD and 60 %Brix = 1.44193 nD.

The data memory in the Abbe refractometer can also be deleted via the software, so that 100 memory locations are free again and no data is read out twice.

Abbe refractometer application areas and what it is used for

Abbe refractometers are widely used because they allow the refractive index to be measured quickly and easily. 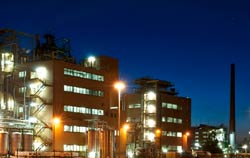 Abbe refractometers in the chemical, automotive, metal and building industries

enable concentration determination for solvents, mordants, industrial oils, lacquers, adhesives, surfactants, coolants and the check of the flow of chemical processes during the production.

Abbe refractometers in sugar, food and beverage industry
are used to determine the sugar concentration in intermediate and end products, to determine the alcohol content in beer, wine, spirits, quality control and for waste water control.

Concentration determinations of raw, auxiliary and operating materials as well as semi-finished and finished products are then carried out. Checking the solids content is extremely important in many industries in development, research and production and is often carried out with the help of the Abbe refractometer. In the beverage industry, checking the sugar content and sugar concentration is a very important measure and is therefore a part of routine analysis.

Many applications aim to determine the concentration in a carrier medium. A traditional example is the determination of the sugar content in mostly aqueous solutions. For example, by determining the sugar concentration of a grape, its degree of ripeness can be determined, which makes it interesting for winemakers. The Abbe refractometer can also measure the original wort when brewing beer, the water content in honey. But also in industry, the Abbe refractometer can be a real aid, for example, thus, the oil-water concentration in cooling emulsion mixtures in metalworking machines or the acid concentration in batteries can be determined. The Abbe refractometer can also be found in medicine, for example, the protein content in urine can be measured. There are many other areas of application in which the refractometer is useful and greatly simplifies the work. Meanwhile, in order to ensure the comparability of the results, own scales have been established (degrees Oechsle, degrees Brix, degrees Plato). Refractometers are usually equipped with the double scale % mas sucrose (Brix)/°Oe or triple scale % mas sucrose (Brix)/°Oe/KMW-Babo. Internationally, the % mas sucrose (Brix) scale is valid. The Oechsle scale 0-140°Oe is valid for fruit juices, foreign grape musts and distilling mashes. For German grape musts only the Oechsle scale 30-140°Oe is valid. Refractometers with this scale are marked with a "D".

Adjustment and calibration
In order to meet and maintain the test criteria or test intervals specified in your company's test equipment manual, it is possible to send the Abbe refractometer to the PCE Instruments test and calibration laboratory at any time. The Abbe refractometer is then calibrated using certified standards and an ISO calibration certificate is issued at the same time, so that you are always in a position to comply with the specifications stated in the technical data of the device and to prove the measurement accuracy during an audit. In addition, standards for different refractive indices are optionally available, with which the measuring accuracy of the refractometer can be regularly checked directly in operation.

The Abbe refractometer PCE-DRB 10 is a modern, highly accurate, data-capable and cost-effective measuring instrument for multifunctional analysis of a wide range of parameters such as refractive index or Brix value and is therefore indispensable for all company and public laboratories working in the field of analysis.

Interesting facts about the Abbe refractometer

Roughly, one can differentiate between three measuring methods of the Abbe refractometer:

- In the case of the transmitted light principle, a parallel beam of light is refracted at the interface of both media.

- In the case of the grazing incidence and total reflection, the critical angle of a beam of rays with different angles of incidence on the interface is measured. The measurement result is most accurate at 20 °C, therefore the temperature should always be determined and the falsified measurements should be corrected with the help of a correction table. In this Abbe refractometer, however, an automatic temperature correction takes place, which of course greatly increases the measuring comfort.

Abbe number
The classification of lenses (e.g. lenses for glasses or technical plastics) is done, for example, by means of the Abbe number. The number was named after its inventor Ernst Karl Abbe (Jena) and it is an individual dimensionless glass constant. Simplified, the Abbe number represents the ratio between the light scattering of different wavelengths and the corresponding refractive index (how the refractive index changes in relation to the wavelength). The number also characterises the finest distribution (dispersion) of the glasses. The greater the dispersion is, the smaller the Abbe number is. There is a clear relationship between the glass quality and Abbe number: high number = high quality. The dispersion of plastics is also determined with the Abbe refractometer.