The quality of hay and straw is an important factor for nutrient supply and health of animals in the livestock farming. Only the drying of the mown grass makes the forage becomes durable and therefore also storable. If the hay is too moist, for example, bacteria and molds can spread. Forage or bedding material becomes unusable. It is therefore important to check the moisture content of hay and straw. This can be done particularly conveniently and precisely with the hay moisture meter from PCE Instruments. The hay moisture meter was specially developed to determine the moisture and temperature of hay and straw.

The hay moisture is an important indicator to monitor the fermentation process in the hay. If fermentation takes place in the hay, the feed has no nutritional value for the animals. Therefore, a low hay moisture is important. This can be determined quickly and easily with the hay moisture measuring device. Ideally, the value is 13 percent. In principle, the following also applies: the drier the hay and straw are, the less likely it is that bacteria and fungi will spread. However, the hay should not be too dry either, otherwise it will become too brittle and lose its quality. The manufacturer has designed the hay moisture measuring device with a measuring range of 9 to 50 percent. 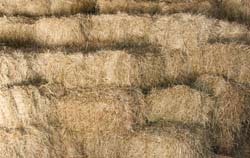 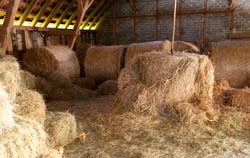