Delivery time: 10 - 14 days
Car Measuring Device PCE-DSX 20-ICA with trigger input, incl. ISO calibration certificate
Portable, stroboscope for the professional in operation / Bright xenon flash / LED display / External trigger input / Setting via buttons and rotary knob
The car measuring device is usually used for speed or vibration measurement or for motion observations. This stroboscope has a small design and is light in weight. This allows the stroboscope to be conveniently used even when measuring in hard-to-reach places. The device is the optimal tool for the practitioner. The flash rate is set via a rotary knob on the stroboscope and displayed on a digital display. Continuous operation is easily possible with the stroboscope. The device also has a trigger input, which allows external triggering or synchronization. The supply voltage is ensured by mains cable. The half or double speed can be selected via the keyboard.
Applications:
This car measuring device is the ideal tool for service technicians and maintenance personnel of industrial equipment and machinery. Check the speed, the synchronization or make mistakes visible that you can not see with the naked eye - optically bring processes to a standstill. The stroboscope has been used for many years in many industrial processes, but also in research a. Development proven:
- At bottling plants and labeling machines of breweries and mineral water producers
- On paper and printing machines: The stroboscope is used here to detect the register at speeds of more than 60 m / min. One looks at the web before winding with the stroboscope). The stroboscope makes it very easy to visualize even the smallest process errors, such as pulsations. The following picture was taken on the wire of a paper machine. All strips and suckers below the sieve running along these strips worked perfectly, except for one. Of course, this was not visually visible. With the stroboscope, the source of error could be detected by very fine marks on the finished paper: 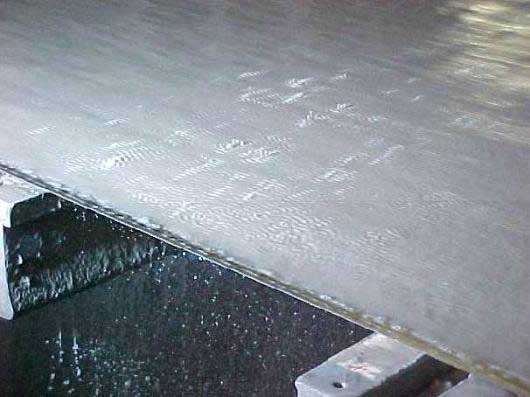